Australian States and Territories set a maximum darkness for the aftermarket application of window film on a passenger vehicle’s side and rear windows. Hence the phrase ‘darkest legal tint’.

This limit is expressed as a visible light transmission level, or VLT percentage.

WFAANZ advises you stay within the legal limit. Modifying a vehicle with illegally dark windows renders that vehicle unroadworthy. Failure to comply with tint laws could result in fines, rego fail, the cost of tint removal, insurance cancellation and even criminal charges if the windows prove to be a contributing factor in an accident.

View your State/Territory regulations using the links below.

The good news. A 35% VLT allowance for front passenger windows is the standard across Australia. But all States and Territories have introduced different requirements for rear windows, i.e. windows behind the driver, or windows behind the B pillar. For these windows, the NT allows 15% VLT and 20% VLT is permitted everywhere else.

To learn why it’s important to tint within these legal limits, take a look at our Keeping it legal fact sheet.

WFAANZ sells a 35% VLT card to check if your windows exceed the 35% limit. Contact info@wfaanz.org.au for more info.

Windscreen. After-market window film cannot be applied to the windscreen, even if the film is optically clear, except for a visor strip across the top of the screen (which is outside the driver’s primary vision area). Each State/Territory stipulates how this visor strip should be measured. 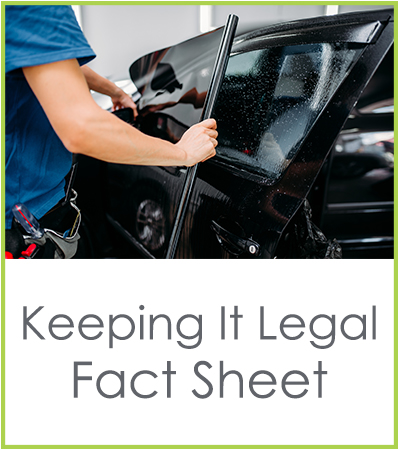 Privacy glass. For window film on privacy glass (factory-tinted glass), the same VLT rules apply, i.e. the combination of glass + film cannot exceed the VLT limit. This means you can’t legally apply window film – even if it’s clear film – on privacy glass that’s already 35%, 20% or 15% (depending on the glass location and your State/Territory).

VLT regulations in Victoria. After receiving numerous reports of confusion surrounding VLT laws in Victoria, WFAANZ worked with VicRoads to produce this fact sheet (right), which provides all the information a car owner should consider when tinting the windows of their light vehicle. 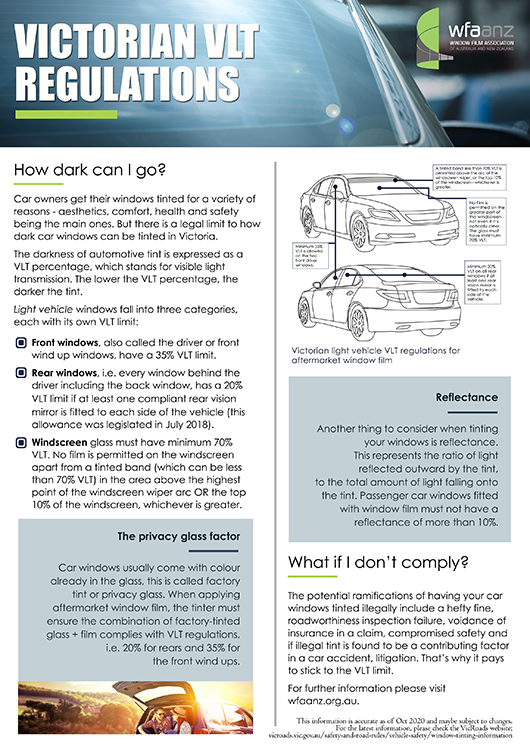 WINDSCREENS: The only films allowed on front windscreens are anti-glare bands that extend no lower than the bottom of the sun visor when lowered. Stone guards are allowed on trucks and buses only.

SIDE AND REAR WINDOWS: On any passenger car (Class MA vehicle), the darkest legal tint is 35% VLT* on all windows, including the front side windows (on either side of the driver), rear windows, side rear windows and back windows. Please note that a station wagon has the same classification as a car.  Vans, 4WD’s and SUV’s can have any degree of dark tint behind the driver’s door, but the limit of 35% remains the same for the front side windows.

*VLT stands for visual light transmittance. The amount of visible light that passes through a vehicle’s window is measured as a VLT percentage. The lower the VLT percentage, the darker the film. Clear glass has a VLT of approximately 85%.

OTHER VEHICLES: Stretch limousines or hearses have the same restrictions on the windscreen and front side windows, but can have any VLT level applied to the rear, side rear and back windows.  Any vehicle with a film applied to a window that is further back than the driver’s seat must have external rear view mirrors on each side.

POINTS OF NOTE: Vehicles with factory tinted glass may have lower than 35% VLT. In these instances, each window is marked as AS3 glass.

Mirror film or partial mirror film is not allowed in any vehicle.

VLT can be checked using a calibrated VLT meter or a 35% VLT card, which is available from WFAANZ. WFAANZ installers use labels to certify the VLT level as being no less than 35%.